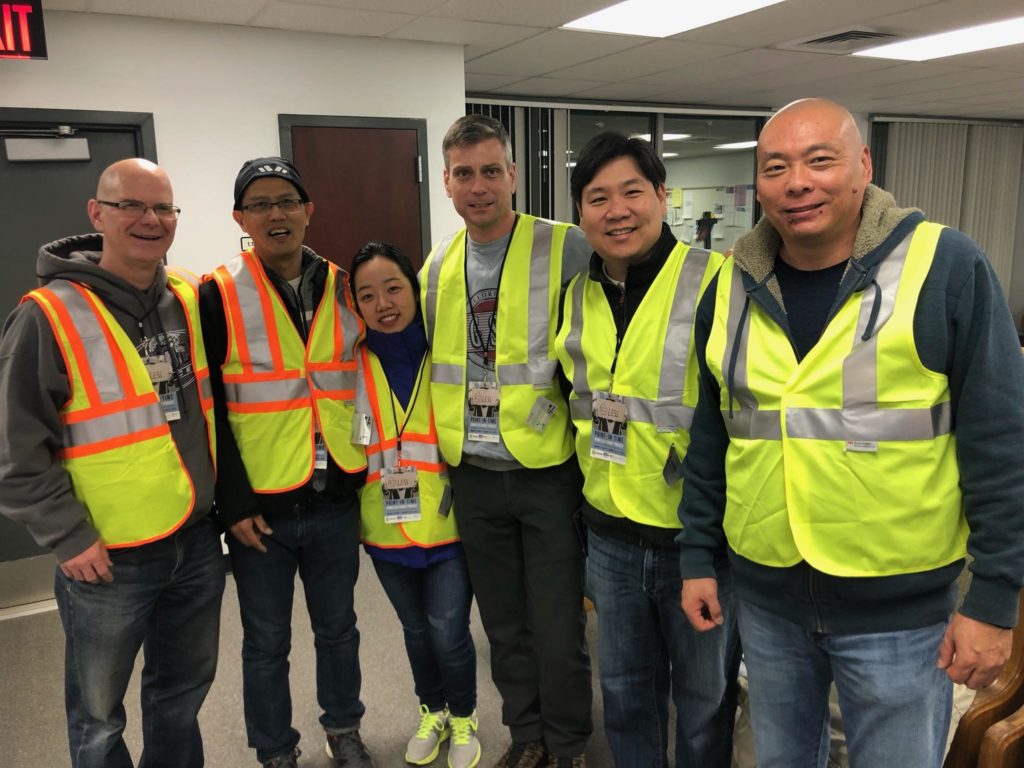 As a board officer of the Gwinnett Coalition of Health and Human Services, I have been aware of the bi-annual Point in Time Homeless Count, which is basically a homeless count in Gwinnett County, for many years. Every time this count is organized, I am eager to participate and to learn more about the issue that has been growing in our community for over a decade. However, I eventually got busy and forgot or was too nervous to interview our community’s homeless. However, this year, I decided to be purposeful not only to participate, but to bring others along for the experience and spread awareness of the issue. So, I posted on my Facebook page that I wanted to organize a team to participate in the homeless count on the midnight to 4am shift and waited for people to jump at the chance to participate and serve. However, to my surprise, no one responded. Not only that the same people that “like” my posts about family or City of Duluth activities didn’t even “like” my post/comment. So, after some prayer, I decided to approach the employees of The Whitlock Group.

I called an office meeting and offered the opportunity to participate in the homeless count from midnight to 4am and to give the participating employees the same day off with pay. Being a service organization, I couldn’t offer this to the entire staff, but I just needed 4 to make a team (counting me). Not only did The Whitlock Group employees hear the call to serve, so did their spouses. In fact, I had to limit the employee participation. Our team was made up of me, Michael Park, Michael’s wife Sarah, and Chip Sweney, spouse to Leigh Ann Sweney. Chip mentioned our efforts to his Bible study group and we added two more people to have a large team of 6.

Midnight and On the Search

I can’t share the areas we visited; however, we did travel by police escort. Our officer was undercover, which would work to our advantage later in the morning. We met at the Lawrenceville Co-Op to get addresses to visit, download an app to document and interview the people we encountered, blessing bags that provide some utilities, socks, and information on how to get assistance, and Chick-Fil-A gift cards to provide to the people we met. We piled into a mini-van and went to our first location.

We were lucky that the January morning was warm and a cold front that was expected that day was delayed. Our assigned officer was experienced and was a great guide of what to look for. I don’t know what the other members of our team were expecting, but I was expecting to walk into the wooded areas and find encampments. Mostly, we walked into the wooded areas around local businesses and found signs that someone had set-up camp but was not around. After walking deeper into the woods with our flashlights, we found areas of trash – bottles, food containers, and canvases. Sometimes we would find a collapsed structure made of limbs and brush and sometimes a mattress. To my surprise, we never found signs that a fire was started or used to stay warm. When I see homeless on TV or in the movies, they are always standing around a community fire. However, fire brings attention to their location and their locations were mostly on private property. It wasn’t until we reached the last address that we encountered homeless people.

The last location for the night took us to a utility right of way. The right of way area was cleared but was surrounded by woods on both sides. We walked the right of way with half the team on each side of the property. We were looking for worn trails made into the woods. We found many trails and shined our lights to find an encampment but saw nothing. I was beginning to wonder if what we were seeing were trails made by kids with bicycles or just playing in the woods. However, as we walked the right of way further, we began to find chairs scattered throughout the woods and signs of areas where someone had stopped to eat a meal. Then one of the guys on our team called out that he was seeing something odd in the distance in the woods. I had a spotlight, so I approached and shined my light into the woods and saw what looked like a piece of wood painted pink. We called the officer closer and we agreed as a team to continue the search. I lead the team down the path toward the pink piece of wood, which I just assumed was trash that someone had tossed into the woods. As we got closer, I was able to discern that the color pink that caught our eyes was the back of a self-made shelter and the other walls of the shelter were a mix of purple and more pink. Next to the wooden structure, was a large blue canopy that looked to be 20 to 25 feet long. We began to call out, “HELLO…HELLO.” We continued to call out, “HELLO…HELLO…CAN WE TALK WITH YOU?” Eventually, we saw a flashlight inside the blue canopy-tent. The occupant answered very sternly, “GO AWAY”. We continued to communicate back and forth trying to convince the occupant that we were there to help and just wanted to talk. Then the occupant stated, “IF YOU DON’T LEAVE, BULLETS WILL BE COMING THROUGH THE TENT!” I took that very seriously and later found out the officer didn’t hear this threat. So, I announced that we would leave. When I turned around to leave, there was a man smoking a cigarette walking up between me and my team. Although I was startled at first, the man was very welcoming and willing to talk. He informed us that there were several “homes” in the area and that two more men were down the path. At this point, the man in the tent came outside to talk and see what was going on. Two of our team members conducted the interview to learn more about them and their situation. Another team member and I went to look for the other two men. We began to get too far away from the rest of the team and the undercover officer called us back. The two men being interviewed were Caucasian and although looked to be much older, were in their 50s. Both had been homeless for many years and have made the encampment a lifestyle for themselves. Both came to Gwinnett County from different areas to work but lost their jobs and could not find work. Both indicated that they were not able to do work any longer due to age and illness. They also told us that one of the men that kept running from us to avoid the interview, was an active military person who was in Gwinnett County to go to school and was being shipped out next week. We were never able to determine why this active military person was living in the homeless encampment but going to school. Did he have to live this way to afford school? Did he do it to save money because he was trained to survive in this type of environment? What I found interesting is that the encampment was very organized. The man we first talked to seem to be the leader. He communicated with the other people by walkie talkie. He could not convince anyone else to come talk with us; in addition, all but the two men refused the blessing bags and the gift cards. We offered to leave them if they would just tell us how many to leave. We were informed that the pink shelter is where two ladies lived but were not currently around. We asked permission to look inside the huge blue canopy tent and to our surprise, there was another tent inside along with a cot, table, clothes, and a BB gun. Each structure seemed to have its own private area, but they were close enough to each other to provide the support of a community. With that encounter and knowledge, we thanked them for their time and headed back to our cars.

On the way, we noticed flashlights all around us in the woods on both sides of the right of way clearing. The officer is the one who noticed, and he instructed us to turn off our flashlights and to stand still. As we looked around, you could see people were in the woods around us and shining their flashlights toward the ground, so all we could see was the light around the rims of their lights. The officer decided it was best for us to leave, so we continued to walk toward our vehicles. The right of way area was hilly and as we were talking up the hill, we noticed the silhouette of two figures blocking our path. Their build looked female, but I was not certain. The officer told us to stand still and turn off our flashlights. Once we did this, the silhouette figures walked away and into the woods. However, they stayed at the edge of the woods and watched us leave. Once we crossed this hilly area, one of them yelled out, “GO AWAY!” and we did. The officer estimated about 10 to 15 people lived in the encampment. They were not friendly because they don’t want to be run off the property. I was also surprised that occasionally, you will find someone that has chosen that kind of lifestyle and just doesn’t want the help, but we know that couldn’t apply to everyone in this encampment. However, we were not trained to handle any counseling or services. We documented our estimate of the encampment and turned the information over to the organizations leading the Point in Time Homeless Count. Before we returned to the Co-Op to end our visits, we drove through a parking lot near the wooded area that hosted the encampment. We found 2 vehicles – one with a person sleeping in the vehicle and the other had the materials inside the vehicle that looked like someone was living in the vehicle. Our officer asked us not to approach the vehicle, but to document our findings.

Although our team chose to participate in the late-night count that took us into the wooded areas of Gwinnett County, the Point in Time Homeless Count also included extended stay hotels, those sleeping in vehicles, and under bridges. If you search “Point in Time Count”, you will see that many communities participate in this event all over the nation. To learn more about the purpose of the Point in Time Count, I found this blog related to Gwinnett County’s Homeless Count Project: https://www.gwinnettcoalition.org/blog/2018/12/26/homelessness-in-gwinnett-point-in-time-count-2019/

For weeks after finding the encampment, I carried the weight of what we found on my heart and thought about the people we met. I have been praying for them ever since and praying that the organizations that provide services to the homeless population can work with them to help their situation.

PrevPreviousHow to Properly Insure a Brewery
NextInsurance and Construction: A Love-Hate RelationshipNext

Navigating the world of insurance doesn’t have to be difficult.
Sign up for our newsletter for helpful information you can use.